Container Growing Bay Trees
Bay trees thrive in containers, making them ideal for the patio. They will require an annual trim in the autumn to shape them and a liquid feed throughout the summer. The size of the pot will control the size of the Bay tree - a 30cm (12in) diameter pot will produce a reasonable size tree of about 1.5m (5ft). If a hard frost threatens, move the tree inside to a cool room.

Bay trees are very suited to being indoor plants in the winter. Keep them in a cool position that is open to indirect sunlight.

Bay laurel likes to be pot bound and can stay in its final 30cm (12 in) container for six years or more. After this, repot into a container which is about 5cm (2 in) wider. Ensure that the base of the pot has good drainage (use broken clay pot on the base of the pot) and fill in with a loam based  potting compost such as John Innes. This will provide a neutral soil (i.e. not ericaceous) which has more body to it than a peat based potting compost.

Feed container grown bay in mid-spring and then more regularly (every fortnight) during the summer growing period. In early spring, remove the top 2.5cm (1 in) of compost and replace it with new compost. 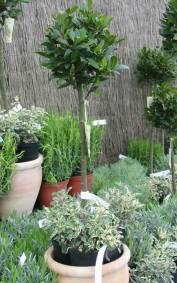 Standard bays look very attractive in containers especially half-barrels. To form a bay standard, buy a young plant with as straight a stem as possible. As the plant grows, remove all lower side shoots, but keep the top side-shoots.

When the bay laurel tree is about 20cm (8in) higher than the final height, cut out the topmost growing tip. Clip back the remaining side shoots to about 3 leaves.

This will encourage the head of the bay laurel plant to grow and it will soon begin to form the traditional 'ball' shape. As more side shoots appear, trim them back to about 3 leaves. When the bay is fully-shaped, prune in late spring and late summer to maintain its shape.

Using Bay Laurel as a Herb

Bay leaves are used extensively in French, Italian, Spanish and Creole cooking. They are used to flavour soups, stews, shellfish, pickling brines, sauces, marinades, poultry and fish dishes. Always remove the bay leaves from the food before serving, because they are sharp and can cut the mouth and throat. French chefs place bay leaves, parsley and thyme in a little bundle called a bouquet garni that is removed after cooking. Pick bay leaves early in the day and dry quickly, out of sunlight, under weight so they won't curl. Store in an air-tight jar and they will keep their flavour for up to a year.

BACK TO HERB INDEX PAGE

Name: jim@GardenAction
E-mail: webmaster@gardenaction.co.uk
Date posted: December 05, 2011 - 09:18 pm
Message: There should be plenty of dormant buds in the stem. Prune off above them at the height you want.

i have a bayleaf tree in a big pot that is becoming too big,how to cut it down to size without killing it ?

Name: T Tappenden
E-mail: Private
Date posted: January 23, 2011 - 06:22 am
Message: I have three bay trees in pots. 2 look healthy but the 3rd is suffering with a leaf problem. The leaf area between the veins appears to be dying and the entire leaf appears copper coloured. I can see no obvious pests and the tree was fed in the summer with slow release fertilizer. All the leaves appear equally affected. Is this cold damage, or water logging? What can I do to rescue my poor tree. Any advice welcome

Name: Wendy HART
E-mail: Private
Date posted: October 14, 2010 - 03:23 pm
Message: I have a bay leaf plant it growing like a V and is thick at the bottom with leafs. can I devid or split the plant