How To Identify and Control
Honey Fungus

WHAT IS HONEY FUNGUS
As the name suggests Honey fungus is a fungus. It exists primarily on dead plant material, but can also become a parasite feeding on live plant and tree roots. It attacks a wide variety of plant life ranging from trees to bulbs.

HONEY FUNGUS AMAZING FACT
A mushroom colony can reach an enormous size and cover a very large area. Recently, a variety of the honey mushroom was identified in Oregon, USA which had colonized 880 hectares of wood in about 2300 years (and thereby killed a large number of trees) and its weight exceeds that of any other living organism in the entire world!

IDENTIFYING HONEY FUNGUS
The first symptom you will probably notice with plants and trees affected by Honey Fungus is general ill-health. Leaves do not grow so well, are discoloured and fruit is small. Surprisingly, flowering plants may produce larger than normal flowers immediately before they die back completely. 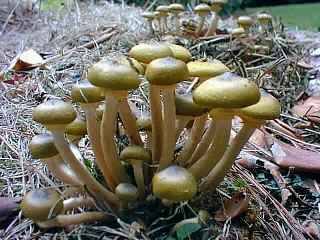 Then you will notice white to cream honey-coloured growths of the Honey Fungus appearing in the soil around the base of the plant / tree - see the above picture. These growths are fan-shaped.

When you pull the plant up, there will probably be dark brown rhizomorphs which look like brown to black root-like growths which resemble bootlaces. In advanced cases these root-like growths appear above the soil level. In many cases, beneath the bark of the trunk and branches you will see white mycelium. These form a  thin creamy-white layer with a strong mushroom smell.

CAUSE OF HONEY FUNGUS
Honey Fungus is caused by direct contact with the roots of an infected plant or tree. It is also caused by the rhizomorphs (see above for explanation) spreading underground from the infected plants to other healthy plants.

Some plants are more vulnerable to catching Honey Fungus whilst others are relatively resistant to it. The list below shows some common plants in these categories. It is true that healthy plants are less likely to be attacked by Honey Fungus compared to plants which are weak and growing in poor conditions.

CONTROL OF HONEY FUNGUS
The is no chemical treatment for Honey Fungus. The only course of action is to dig out all infected plants and burn them. Try to remove as much of the root system as possible because this is where the disease is most easily transmitted to other plants.

For smaller areas a degree of further control can be achieved by removing the top 60 to 90 cm (2 to 3 foot) of soil and replacing it with infection free soil.

HONEY FUNGUS - SOME OTHER FACTS
Does Honey Fungus Glow in the dark?
Astonishingly yes it does!

How High?
Honey fungus spores have been recorded as reaching up to five miles high and at ground level they are present everywhere, no matter what the time of year

Can I eat Honey Fungus?
Honey fungus is edible as the recipes at http://www.mssf.org/cookbook/honey.html show. But make sure that it's honey fungus you are eating and not a poisonous mushroom or other fungus!


BACK TO PREVIOUS PAGE