How To Win The Slug War

Your vegetables and plants are slug paradise - wet winters combined with temperate wet summers provide the ideal conditions for slugs. Their natural enemies, weather-wise, are frosty winters and hot summers.

Know Your Slug!
The most common slug is the garden slug ('Arion hortensis' to be precise). It's grey or brown and only 4cm (1.5in) long. It slithers around your garden on an orange sole. Another slug you may may well meet is the field slug ('Derocerus reticulatum'). This one is different from the garden slug because it has distinct brown patches on its sides. Both slugs are bad news for your tender plants and vegetables.

Another common slug you will meet looks a bit more of a monster - it can be up to 15cm (6in) long and is called the 'black slug' because of its colour. Many people assume that this is the slug which is doing all the damage. In fact it causes very little damage to your plants - it's the much smaller garden and field slugs which cause all the damage. So the motto with slugs is 'ignore the big black ones'!

There is a less common slug known as the keeled slug (Milax budapestensis). It's about 10cm (4in) long and has a definite ridge down its back. It's not as common as the other slugs, but it does cause considerable damage.

Organic Control
There are a variety of non-chemical solutions to slugs, some of which are described below. Talk to gardeners in your area to find out what they use. 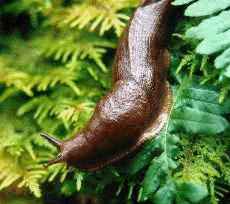 Nematodes are the latest and it seems the most effective way of controlling slugs, this beats the chemical alternatives easily. Nematodes are tiny organisms, so small they are invisible to the eye. They are naturally occurring organisms which are harmless to you, your kids, wildlife and your plants.

The idea is to buy them in plastic packages, put them into a watering can, add water and then water the areas affected by slugs. The little nematodes then enter the slugs and release bacteria which slowly kills the slug. Even better news is that the nematodes then multiply and go in search of more slugs! It does work - farmers have been using them for several years and are increasing their use of them each year.

Click here to go to an in-depth article written by Owen M., GardenAction's expert on green methods of slug and pest control. Owen has been a professional in the pest control industry for over 18 years and he knows almost all there is to know about green pest control.

Barriers
Scatter sharp material around the plants to prevent the slugs getting too near them. Often used are soot, sand, ashes and broken egg-shells. these definitely make it considerably more difficult for slugs to get near the plants by drying up the mucus which slugs rely on to move. All of them will be affected by wind and rain, so frequent re-application is required. They also suffer from the disadvantage that they do not lower the number of slugs in the garden, although it may well encourage them to take up residence in the neighbours garden instead!

The 100% barrier method that works for seedlings is a plastic bottle with the base cut off. Insert it at least 10cm (4in) deep into the soil around the seedling and only the most determined slug will succeed - great as a cloche as well. The problem comes when the seedlings outgrow the bottle. However, slugs really do prefer the tastier younger plants.

Another plastic alternative is  a band of flexible plastic placed all around a number of plants - these are available from garden centres. The plastic should be at least 30 cm (1ft) high; 10 cm (4in) below ground and 20cm (8in) above ground. This doesn't stop all slugs, but deters most. The problem here, is that slugs may already be inside the plastic wall, and they won't be able to get out.

One common problem with barrier prevention is that you can apply apply them too late in the season. Slugs are not stupid, especially when laying eggs. They lay their eggs late in the year just under the soil near leaves which have fallen to ground. They do this because they know that next spring it is likely that new tasty plant shoots will appear. Placing barriers around prized plants in spring will trap emerging young slugs exactly where you do NOT want them.

So, the best plan is to clear the top soil around prized plants in late October, replace it with clean soil. Then place the barrier around the plants. This will remove the slug eggs from the soil around your plants rather than keep them in the soil.

Beer and Milk Traps
Quarter fill a jam jars or any plastic container with either milk or beer, and sink them into the ground so that they are about 1 to 2 cm (half to one inch) above the soil level. The slugs can easily climb this, but it will stop ground beetles from entering them and drowning. This method definitely works, although you need at least for jars per square metre (yard), and they will need to be replenished every two or three days.

Hand Collection At Night
Easily the most effective - simply collect the slugs by hand (a long needle on a stick can be used if you don't like touching them) and transfer them to container of salt water. You will need a torch to spot them - expect to kill roughly a hundred per hour. Search on the lawn, paths and around tasty plants.

You may well find that a large number of slugs are on your lawn at night, rather than directly on the soil. This raises the interesting proposition of getting the lawn-mower out at midnight and single handedly massacring thousands of slugs in half an hour. Because of the obvious safety implications of mowing the lawn at night, I have never done this myself. However, a friend of a friend of ours tells us that it works a treat!

Chemical Control of Slugs
Slug pellets sold in the UK contain metaldehyde and / or methiocarb. 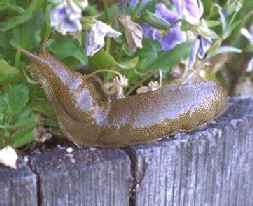 Originally sold as a solid fuel, its ability to kill and control slugs was discovered by accident when farmers in France found dead slugs around picnic sites where the fuel tablets had been discarded by tourists.

It kills slugs both on contact and when eaten by the slugs. The pellets consist of around 5 % metaldehyde with the remaining 95% being designed to attract slugs - pure metaldehyde will actually repel slugs. Hence the reason for applying slug pellets sparingly - too many in a small area will repel them, not kill them. The poison works by causing the slugs to produce large amounts of mucus which cause dehydration and prevent them from moving.

The best time to use metaldehyde pellets is on a warm humid night when rain is not expected the next day. The warm humid weather attracts the slugs to the surface where they eat the pellets. They are then prevented from moving by the mucus they extract, and the dry conditions the next morning finishes them off. Shower resistant pellets will remain effective over several days.

Metaldehyde is poisonous to mammals so will damage or kill a wide variety of useful garden animals. Avoid contact of the pellets with plants, because they absorb the chemical into the crops we eat. For this reason, metaldehyde spray (as opposed to pellets) is not advisable at all for garden use.

Metaldehyde tapes have been available for several years - they are sold as coils of paper which should be laid on the soil near the threatened plants. The slugs eat the tape (made to be tasty to slugs) and also the metaldehyde. The advantage with the tape method is that wildlife do not eat it and it is thus much more 'friendly' compared to pellets. 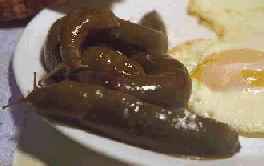 Ten times more poisonous to mammals than metaldehyde, it's a far more dangerous chemical to have around the garden. In addition, it is a very effective insecticide and therefore kills a far wider variety of beneficial animal life than metaldehyde. It's more costly than all other methods, and there is no real evidence that it is more effective than metaldehyde.

Which Chemical To Use and Where?
If you have to use chemicals to kill slugs, use metaldehyde and for economic and successful results, use it sparingly.

Aside from the arguments against chemicals in the garden however, ask yourself this question - if slug pellets are designed to attract slugs (and they are), do you really want to spread them around your tender plants? In our view, they are much more effective if they are sparingly spread in those areas of the garden where you suspect the slugs are hiding during the day. A controversial view, but read this paragraph again and think carefully.

BACK TO PREVIOUS PAGE