They should be sown 1cm (half inch) deep and well-watered. Sow thinly, because crowded seedlings result in weak plants later on. The seedlings should initially be grown at least 10 cm (4ins) apart.  Germination should occur in about 10 days time, maybe a little longer in cold weather. If you do not use all the seed, keep it in a cool, dark place because it will keep for at least three years.

If you sow the seeds under protection (cloche for example) this should occur in late March . Click here to buy a poly-tunnel or cloche online from our recommended suppliers. 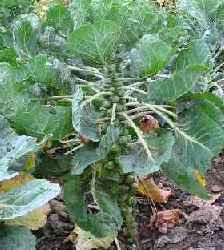 The sprouts should be transplanted to their final site when all danger of frost has passed, some time during early May. At this point the seedlings will be about 7cm (5in) high. The soil should have been well-dug a couple of months earlier, giving time to allow the soil to settle. The seedlings should be planted 60cm (2ft) apart. Ensure the soil is firmed back and if at all dry water well - a shortage of water at this stage will almost certainly affect the health of the plants later on.

Care Of Brussels Sprouts
Sprouts are extremely easy to care for - just ensure they do not run short of water. Hand weeding (their roots are shallow and easily damaged) will also be necessary occasionally. Unless the soil is very poor, do not feed with any fertiliser, this will only result in leafy sprouts. A mulch of well-rotted compost will be appreciated. If the site is exposed to strong wind, staking may be required.

Name: Bob Newman
E-mail: b_newman38@hotmail.com
Date posted: November 27, 2011 - 06:28 am
Message: Hi I am new at this gardening lark but am willing to learn
It is now 27th Nov and all I have are leaves and no sign of any sprouts any ideas why please ??