Care For Your Raspberries 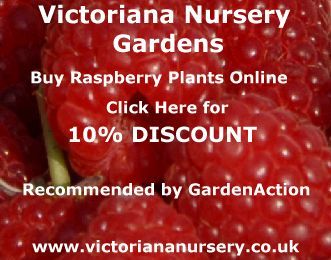 Summer fruiting raspberry fruits grow from this year's shoots on last year's branches. The aim of the first year's pruning of raspberry canes is to encourage the plants to establish a good root system and prevent them from producing fruits. During June if any fruits appear, pinch them off. If you do this, you will not get any fruit the first summer but the root system will be encouraged to grow well. 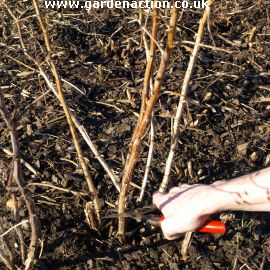 For summer fruiting raspberries, prune from the second year onwards by cutting down all of the previous year's branches to 8cm (3in) from the ground as soon as possible after the fruit has been harvested,  around July time. Any weak looking new shoots should also be cut down. Tie in the remaining shoots to the support wires as they grow throughout the summer.

Autumn fruiting varieties produce fruit on branches grown this year, Pruning of these consists of cutting all growth to 8cm (3in) from the ground each February.

Autumn fruiting raspberries are very versatile because as well as pruning in the traditional manner in February, you can also have an earlier crop in early summer if you prune only the top 10 cm (6 in) from some of the canes. These canes will give a much earlier crop but at the same time allow the traditionally pruned canes to push through and crop in autumn.

The plants need a ready supply of water to produce good fruits. Depending on the soil type, watering throughout the summer on a weekly basis may well be needed. All raspberries will appreciate a layer of well rotted compost being applied to the soil in February each year. Because raspberry roots are very near the surface, do not dig the compost into the soil, this will only damage the roots. In the absence of compost, scatter a handful of bone meal to each square metre (3ft).

Raspberry Picking or Harvesting
Raspberries which have been picked do not store well at all - they will only last a day or so. They are also easily damaged during picking and in storage. The best solution is to pick them on the day they are required and do not let them be crushed by their own weight. The fruit does not all ripen at the same time, so harvesting can take place over several weeks.

Raspberries freeze very well. Initially freeze them spread out on a plate or dish to stop them all freezing into a mass. When frozen they can be put in plastic bags or containers and stored in the freezer for a couple of months.

Name: Bev
E-mail: the3monroes@yahoo.com
Date posted: July 03, 2011 - 10:34 pm
Message: I have a question......
I bought some marked down plants at walmart, but according to instructions,it is not the right time to plant for Texas how do I store them? or do I just put them in the ground anyway. Thanks for any input.


Name: Deborah
E-mail: clm1963@gmail.com
Date posted: August 09, 2010 - 10:54 am
Message: No advice but rather a question. What advice does anyone have for growing raspberries in South Africa?