We have reviewed a range of garden centres all over the UK. We looked at their plants, the facilities available, the cafes, the prices, disabled facilities and much more. We took pictures of the good and the bad and in many cases talked to the owners and managers. We hope these reviews help you select garden centres that suits your needs.

The number of reviews has now grown so large that this page groups garden centres either by county (see right), city /town (see left) or by owner (see below).

GARDEN CENTRES BY COUNTY BELOW

If an area is not underlined this is because we have not yet reviewed any garden centres in that area at the moment. The number of garden centres will expand rapidly over the next six months.

If you want a list of garden centres by owner / company then click one of the entries below.

GARDEN CENTRES IN THE UK - A BRIEF HISTORY

Prior to the 1960s gardeners bought their plants mainly at nurseries. These were much smaller concerns compared to the large garden centres of today. Often, the nurseries had been in the same family for several generations and provided valuable local services to the gardener. Only plants in season would be available for sale and plants "in pots" out of season were a rarity.

In the early 1960s, the Americans successfully developed the concept that containerised plants could be sold all year round. British entrepreneurs latched onto this idea and developed the principle here in Britain. The "garden centre" was born in the UK.

From those early days garden centres have developed out of all recognition. Yes, some of the family nurseries still exist and we applaud them for that. Some of the garden centres in the UK are also still family owned, and congratulations to them as well. 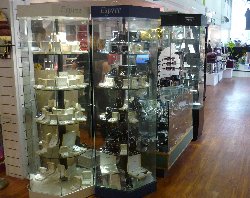 The mega-large, company owned garden centres of today typically have about 40% of their floor area devoted to plants and gardening items. The remaining 60% of the floor area is given over to gifts, cards, delicatessen, cafes and other non-gardening products and services.

The picture on the left is typical of some of the larger garden centres. At Bents garden centre they now have indoor sales areas that include expensive jewellery.


These larger garden centres have clearly identified that many customers prefer department-store like environments selling a massive amount of non-gardening goods along side plants and gardening accessories. The trend setters in these large garden centres are Dobbies Garden Centres. Their new garden centres are based on a template formula which Dobbies have now repeated into double numbers. The "grand" entrance, the slick modern layout, the five year guarantee and the regimented and easily maintained plants area.

The main player though in the UK garden centre market is easily Wyevale (renamed in July 2009 to The Garden Centre Group). With over 100 branches throughout the UK, they are number one. With so many garden centres they clearly have a "formula" but this is not so evident to the customer as in the Dobbies Garden Centres. In 2008 / 2009, Wyevale had a very rocky financial period and came close to collapse. However, they managed to renegotiate their borrowing requirements with the banks and their future is not quite so uncertain.

Over the last 15 years, Christmas gifts, cards, trees and decorations have become big business for the garden centres. Some transform November and December into a Christmas wonderland of flashing lights and snow scenes. The reason for this is clear, Christmas is a very poor time of the year for plant sales.

Examine the efforts of the various types of garden centres at the October to December Christmas period and one thing becomes very clear. As a rule of thumb, the larger independent garden centres transform themselves into a Christmas Wonderland far better than the Dobbies, Wyevale and Notcutts chains do. Christmas time is one of the key profit-making periods for garden centres, and maybe the large independents are making the best job of it.

For those curious about garden centres in the UK, some statistics provide an insight into how this industry is progressing. First, and most startling, is that the top 3 garden centre organisations (Wyevale (including Blooms), Notcutts and Dobbies (now owned by Tesco), have just under 6% of the garden centre market in 2009. This is clear evidence that there is no one dominant force in the garden centre industry.

The total garden centre businesses in the UK are worth just over £4 billion in 2009. Up to April 2009 the industry was expanding rather than contracting in the face of the recession. Time will tell if this continues into 2010 but the signs are looking good.

In July 2010, Wyevale's changed its name to The Garden Centre Group. The most well known garden centre name in the UK has now been lost forever. Wyevale's claim that this is a reflection of the diversity of the garden centres taken over during the past few years.