Recommended Rudbeckia fulgida Variety:
'Goldsturm'
From seed (Suttons). Sow outdoors in late March in the border where they will grow. They come into flower during August and last until the end of October. If you want a border plant that will still be coming up after 5 years, this is well worth a try. This variety prefers moist soil, so don't let it get too dry. The germination rate is only about 40%, but this still rates as the best fulgida variety.

As a potted 'ready to plant' specimen. Plant in final position any time between Marchand August. Click here to buy this Rudbeckia online from our recommended suppliers. 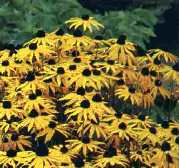 Goldsturm - one of the best of the 'fulgida's

Goldquelle
As a potted 'ready to plant' specimen. Plant in final position any time between Marchand August. Makes an excellent cut-flower - this is a fine example of the traditional coneflower. Buy online from our recommended suppliers of this plant by clicking here.


From seed (most major seed sellers). Sow outdoors between March and April in the border where they will grow. The germination rate is 65%. A Fleuroselect (all Europe) Bronze Medal winner. This is the one the one to go for if you want proven performance. A superb bedding plant that produces large flowers in a golden-yellow colour, with a deep black central cone. The flowering period is late July until early early November. They prefer full sun and a well-drained soil, but are very tolerant of most conditions. If you're a beginner or an expert, you won't be disappointed with this one. 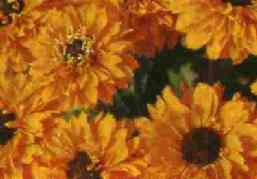 
From seed - the latest variety being sold by Mr. Fothergill's and Suttons, this one is much the same as Goldilocks above, but is a dwarf variety. Sow outdoors between March and April in the border where they will grow. The germination rate is 60%. Toto has a height of 30cm (12in), which makes it ideal as a patio plant as well as a border plant. Its excellent.


From seed - available from most of the leading seed companies, this one has an exceptionally high germination rate (95%) and is highly recommended for beginners. Sow outdoors late March in the border where they will grow. The germination rate is a very high 95% for Rudbeckias. 'Becky Mixed' grows exceptionally well, resisting all attempts by the weather to spoil it! 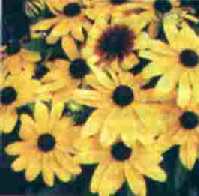